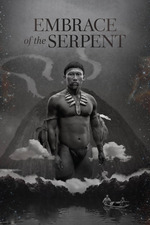 Could, perhaps, have been twenty minutes shorter and not lost much, but this is a strange and powerful thing indeed. It's a Joseph Conrad story told from the other end of the telescope, where the tribespeople are the relatable viewpoint characters and the Other is represented by white men, the strangest of whom is Theo. Played by Jan Bijvoet with a worryingly contagious feverish, queasy quality, he is dragged half-comatose into tribal lands at the start of the film. He is a German anthropologist looking for a lost tribe who he believes bear the secret of an incredible medicine. To find it, he needs to earn the trust of the natives - but why would they help him, when all they've seen white men do with their knowledge is "make death"?

Theo's career is unusual enough to give director and co-writer Ciro Guerra a leg-up in depicting him as a mysterious outsider. The tribe's children laugh uproariously at his traditional thigh-slapping dance, and his guides can't understand why, even at death's door, he insists on lugging all his research around with him. In a different time frame, a later explorer travels with a small portable gramophone, whose charms are more comprehensible than Theo's piles of books. Full of carefully written notes, musical notation and sketches that look like something out of the Voynich manuscript, they represent the most desirable movie books since The Babadook.

There are dry spells in Embrace of the Serpent, but they're always followed closely by another remarkable image or set-piece. In one scene, butterflies swarm around the shaman Karamakate like Disney fairies; in another a scarred, one-armed rubber plantation slave begs one of Karamakate's friends to kill him. It ends strongly, too, and not just in terms of the final scene; the closing montage of photographs reveals at least one incident I'd assumed was fictional to be based on fact.