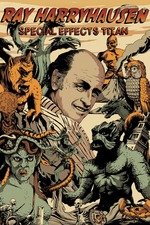 This is one of those fannish documentaries we see a lot of recently, where you take a subject beloved (ironically or sincerely) by movie geeks, get a lot of clips and celebrity talking heads, garnish with wacky fonts and cut into a light-speed go-through of a great Hollywood story. Most of those documentaries are passably entertaining but fairly annoying from the perspective of someone who thinks documentaries should have something to do with craft. So what is it that makes Gilles Penso's film stand above the rest?

Well, it doesn't hurt that he has full co-operation from a subject who richly deserves this kind of praise. Like a lot of people reading this review, I'd imagine, Ray Harryhausen was my gateway to fantasy, SF and horror cinema as a child. I found his work at an important age, when Nick Park (interviewed here) had let me in on the secret that films are made, rather than just things that appear on your TV screen every now and then. And I understood how, given patience and artistry, a puppet could be made to look like it was moving. But a puppet interacting with - even towering over - a full-grown human moving in real time? It blew my mind.

One of my favourite revelations here is that most of the directors Harryhausen worked with couldn't understand it either. At the start, John Landis hymns Harryhausen as the only effects maker who can be considered an auteur, which I initially considered rather unfair to the likes of Stan Winston, Tom Savini and Landis's own collaborator Rick Baker. But what Landis means is that, when you watch a scene like the skeleton fight in Jason and the Argonauts, you're literally watching a piece of film by Ray Harryhausen. No-one else could work out how to choreograph the actors to match the animation, so the great man himself stepped in to direct.

I think this is probably why Harryhausen never worked with a great director; they wouldn't have enjoyed the competition. When you think back to Earth vs the Flying Saucers, you of course think of the expressionist angles and high drama of Harryhausen's stop-motion UFOs, rather than any of the human drama. He sometimes worked with good casts, but they too were easily overshadowed. The Golden Voyage of Sinbad has Tom Baker and Caroline Munro, but only the most ardent fan of the 1979 Doctor Who serial City of Death remembers it as "the one with Tom Baker and Caroline Munro", rather than "the one with Kali and the centaur".

Ray Harryhausen: Special Effects Titan also has some analytical muscle. I enjoyed Penso's comparison of scenes from Avatar and Jurassic Park with The Beast from 20,000 Fathoms, to show how Harryhausen basically invented the way giant movie monsters lumber and swing. Of the connection between Harryhausen's work and modern CGI, Jurassic Park's CGI whiz Phil Tippett is the most interesting interviewee, suggesting that the sheer number of effects shots produced in modern Hollywood make it impossible to imbue any of them with the kind of character and personality Harryhausen's work always had. Like a rueful Frankenstein looking back on the monster he's created, Tippett says "the effects aren't special any more".

James Cameron, of course, has a different view, suggesting that if Harryhausen was born in a different era he'd be working with computer graphics now. Cameron really does have the soul of an Apple Store salesman, always looking at new developments in art not as a way to give creators more choice in how they work, but as a way to get rid of old, obsolete models. When acrylic paint was invented, no-one campaigned to get rid of gouache, but this is the miserable world we live in now. I wanted to cheer when Penso cut from Cameron's assertion to Harryhausen politely explaining that no, he wouldn't be interested in working with CGI.

If Cameron is a complete fucking idiot, the other directors interviewed conform more enjoyably to type. Landis and Peter Jackson are comets of fanboy enthusiasm, Terry Gilliam is delightfully high-spirited, Spielberg is a true mensch, Joe Dante is eloquent and intellectually incisive, and Tim Burton is off orbiting his own planet somewhere. The most affecting interviewee is Ray Bradbury, who remembers seeing test footage for Harryhausen's early, unfinished project Evolution - essentially a wildlife documentary of the whole of natural history - and pledging that, from there on, he would be Harryhausen's friend for life. It's easy to see why his work creates that kind of devotion.