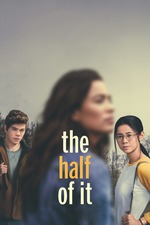 anyone who knows me knows that i (a bi chinese-american) am truly starved for representation. to the point that i've kinda given up on finding it. like, i've projected SO MUCH onto diane nguyen from bojack horseman for the past few years just because she looks like me, and she's not even chinese. i'm desperate here.

so you can imagine how aggressively i lost my mind when i saw the trailer for THE HALF OF IT, not because it looked amazing or anything, but because ellie chu, played by leah lewis, looks kinda like how i would look if i were ever cast in a movie about myself. (not exactly like me, but again: i'm desperate.)

i started watching at midnight PST exactly and i'm glad i did! but as you can tell from my 3 star rating, i did not love this, and i think its main issue is the writing. the jokes fall flat, the dialogue isn't naturalistic, it feels somewhat outdated in a lot of ways. this will sound bad but i guess i can just really tell that this wasn't written by a young person? sure enough, alice wu is 50 years old. i don't think she's hung out with enough high schoolers to, like, actually understand how they talk. sorry.

i was going to say that ellie is the only character who's actually fleshed out, but i don't even know if she feels like a 100% full person to me? she definitely comes closest, but there seriously is so much to be desired in the writing that no matter how hard leah lewis's acting tries to make it better than it actually is, it's all just so, so flat.

considering that a lot of this film has to do with the ~young lgbtq+ experience~, it really does not confront it on a deep enough level for it to even be significant. sounds harsh but that's just my takeaway, and i think it's such a shame.

lastly (and this is important)... THE HALF OF IT suffers from such extreme overuse of the trope where one character yells "hey!" or "wait!" or "[insert name here]" while another character is walking away. and then that person dramatically turns around so the first character can say something that's supposed to be important but in alice wu's case it's usually something super trite. oof. this is LITERALLY in the screenplay at least 5 times. i get that no netflix original rom-com can survive without at least one use, but come on. this is just sad.

anyway, i'm glad to have watched this, and i think it will be a while before i watch any new lgbtq+ film about a chinese character that is actually... good? i mean, those types of films hardly exist in general, so for one to exist AND be good is going to be a steep challenge. but i will continue to hunt for the representation that i am so deeply craving!!

in the meantime, i will continue to gaze lovingly at my funko pop of diane nguyen and pretend that she is 1) chinese and 2) not voiced by a white person. c'est la vie.