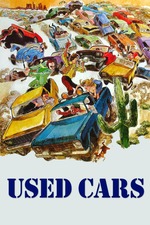 Much more mean-spirited and vulgar than anything else Zemeckis has ever made. That’s neither here nor there, but I found it surprising.

Anyways, this movie is a lot of fun, but it’s an absolute mess. The characters aren’t strong, the plot is cliched and not very engaging, and there’s just way too much going on in the story. They had a lot of fun ideas, but they just slapped them all together without enough care or justification to make them really work.

Zemeckis and the game cast allow the movie to still be often funny and fun, but this is nowhere near the level of quality Zemeckis and Gale established with I Wanna Hold Your Hand and would go on to transcend with Back to the Future. This film feels much more unsure of itself than those movies. It’s a fun watch, despite some incredibly off-putting moments of ill-advised “humour”, but it’s definitely a sophomore slump.