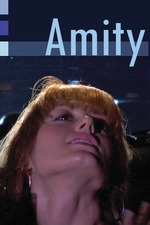 Arguably shouldn't write anything about this, as I've been friends with its writer-director (though we haven't been in touch for a while, which is my fault) and am still friends with its producer, who also plays the film's most crucial role. Briefly, though: Like Simon Killer, Amity serves primarily as a character study of ineffectual masculinity turned ugly, a subject of which I've grown somewhat weary over the years. Was mostly underwhelmed by the quasi-therapeutic relationship between wounded asshole Greg and his preternaturally self-contained limo driver, and put off by Adams' choice to shoot the film almost exclusively in very tight 1.33 closeups. However, the second half is dominated by a 26-minute scene which surrounds the protagonist with five women, one of whom (Marya Murphy—hi, Marya!) is having exactly none of his self-pitying bullshit. It's a masterful exercise in sustained tension, resolved in a genuinely unexpected and subversive way (as opposed to Simon Killer, which tells you how its tension will be resolved right in the title). And that tour de force reverberates backward to some degree, though not enough to entirely allay my feeling that this is another Adams feature that might more profitably have been a (longish) short.