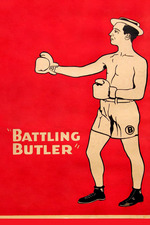 Had the impression that this is considered second-tier Keaton, but either I was mistaken or people are nuts, because ow my sides. Hard to believe it's adapted from a hit play starring another actor—partly because some of the best gags (e.g. the paperboy making a delivery to Non-Battling Butler's campsite—and really the whole "luxury camping" concept) don't seem like they'd work nearly as well onstage, but mostly because the comedy here is so intensely physical and Keaton-specific. His desperate flailing in the ring, captured in lengthy unbroken shots, is as virtuosic in its own goofy way as are the boxing sequences in Creed, and I suspect every bit as minutely choreographed. Balked for a moment at the implausibility of the real Battling Butler allowing our hero to take his place, and was pleased to find that the movie recognizes this and eventually provides a sensible explanation (as well as a savvy detour from the anticipated climax). Plus, the more Snitz Edwards (as the valet), the better.