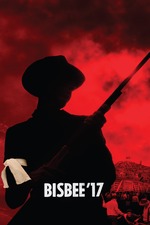 "This is like the largest group therapy session," one participant laughingly remarks at the end of the climactic re-enactment, and that more or less sums up my reservations. Having never previously heard of the Bisbee Deportation, I appreciated the town's descendants' oral history, based mostly on passed-down stories and independent research. (I also appreciated their gradually correcting the mistaken impression created by Greene's opening crawl, which states that the posse shipped the striking miners to the New Mexico desert, "leaving them to die." What happened was unconscionable, but not even remotely as horrific as that sounds.) The movie's "hook," on the other hand, starts out formally intriguing—Greene uses unsettling portraiture (i.e. having interview subjects stare at the camera in silence for a while before speaking) more effectively than Herzog has of late—but gradually takes a more didactic turn, eventually pointing out the already obvious parallel between the events of 1917 and our current xenophobic U.S. administration. And we're meant to take the finale seriously, yes? Because I couldn't stop thinking about Civil War re-enactments, which I've always found deeply silly. Maybe that's my failing, or maybe I misunderstood and the silliness is somehow the point. With Greene, there's always a strong likelihood that any apparent bug was designed as a feature.