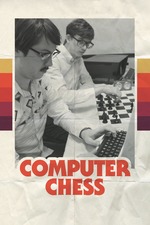 Deeply, deeply, deeply weird. Trust me, you are not prepared for this. It begins as a pitch-perfect evocation of an era, both formally (Larraín's NO looks like 48fps by comparison) and in terms of performance style (everyone from Wiley Wiggins to Gerald Peary (!) seems to have channeled long-forgotten mannerisms from the days when nobody informed geeks of their place on the spectrum). Just as you're settling in for affectionate portraiture, however, Bujalski suddenly goes Cubist. Not only does Computer Chess not resemble any of his previous films, it defies comparison altogether; there's a free-floating, found-object dynamic at work here that feels less "original" or "singular" (words that convey a strong sense of craft) than somehow "isolated," as in a mutant strain of a virus. Actually, here's a comparison: Despite set-ups that are clearly omniscient rather than first-person, this feels more like something compiled from tapes found moldering in a drawer somewhere than did Trash Humpers. As a result, a few scenes that feel more carefully scripted (most notably the swinger couple's ambush), though they work perfectly fine on their own, break the spell just a little bit. And even that spell arguably just amounts to sustained riffing, a masterful goof. But hats off to Bujalski—he's detonated a neutron bomb underneath the mumblecore label. I now have zero clue what to expect from him next, which is damn exciting.