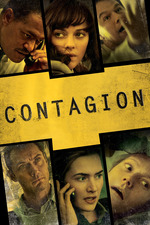 Nothing is more terrifying than the threat you can’t see, which is why so many horror movies take place in inky darkness. But no amount of light will protect humanity in Contagion, which depicts, with a plausibility that’s truly frightening, the effect of a virus so lethal that it kills one out of 12 people worldwide. Easy transmission makes every stray surface a potential biohazard, while the ensuing panic rapidly strips the “civil” from civilization. Indeed, the enormity of the subject, encompassing all mankind, really demands a 20-hour miniseries rather than this fast-paced but inevitably somewhat superficial 105-minute movie.

Directed by Steven Soderbergh from a screenplay by Scott Z. Burns (who also wrote Soderbergh’s The Informant!), Contagion begins with Patient Zero, played by Gwyneth Paltrow in the first of several unconventional star turns. As the virus she contracted in Hong Kong begins popping up across the globe, Centers for Disease Control and World Health Organization officials (Laurence Fishburne, Kate Winslet, Marion Cotillard) struggle to contain the outbreak while an unscrupulous blogger (Jude Law) sells a phony homeopathic cure, and grieving survivors (chiefly Matt Damon as Paltrow’s husband) witness society’s collapse up close. All the while, the statistics grow grimmer and grimmer, until the number of projected fatalities becomes too large to even comprehend. A vaccine is developed, but is it already too late?

To say that Soderbergh keeps things moving briskly is an understatement, and it’s hard not to admire the scrupulous procedural detail and the general absence of sentimentality. At the same time, however, so much is going on that none of it fully registers. Every subplot could easily fuel an entire movie of its own (though I’d skip the one about Cotillard’s doc being held for medical ransom by a desperate village); of the all-star cast, only the relatively lesser-known Jennifer Ehle, playing a scientist who tests a possible vaccine on herself, makes a strong impression. Should an epidemic on this scale ever occur [MARCH 2020: hahahahaomg], you’ll have a very good idea of what to expect, and perhaps beat those who haven’t seen the movie to the furthest extremes of paranoid isolation. But its obsession with surfaces gets taken a little too far.