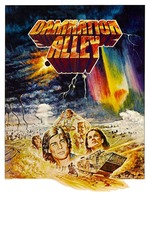 [originally written on my blog]

Strong contender for the junkiest-looking big-budget movie of all time—$64 million in today's money (significantly more than Star Wars cost) somehow bought nothing but cheesy sub-Photoshop opticals, a Planetarium laser-light show in the sky, and swarms of killer mutant cockroaches that are clearly just mats of rubber bug shapes being pulled across the ground on strings. And yet somehow it's not that painful, in part because it seems so pleasurably relaxed compared to its contemporary successors. Prologue sets the tone, depicting nuclear annihilation with such spookily clinical detachment (save for some silent grimacing by Murray Hamilton, mysteriously unbilled) that you just kinda shrug your shoulders and conclude nothing much is at stake—a supposition confirmed when the only people left alive turn out to be Jan-Michael Vincent, George Peppard, Paul Winfield, Dominique Sanda, and Jackie Earle Haley. (Not sure how they missed Keenan Wynn.) What follows isn't so much harrowing post-apocalyptic adventure as genial acid-tinged road trip, with Peppard and Vincent sniping at each other sitcom style and Ms. Sanda looking quite content to serve as irrelevant eye candy. It's a bad movie, to be sure, but at least it's not aggressively bad; jotting it down more than phoning it in, Smight (Harper, Airport '75, and numerous other minor studio flicks I haven't yet seen) appears to be a consummate if uninspired pro, somebody with enough self-confidence not to be pushy or desperate. Those are negative virtues, but there's still something refreshing about them, especially on a day when I'm staring at banner ads for the forthcoming Guy Ritchie Holmes sequel. Just because you're in the mood for trash doesn't mean you want to be pelted by it.