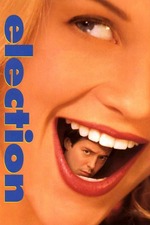 Still the same basic problem, which is that I'm much more interested in the story of an ineffectual teacher who decides to sabotage an annoying go-getter than I am in the story of that man's disastrous extramarital affair, or his disfiguring encounter with a bee, or his predilection for high-school-themed porn. The extent to which the film dogpiles Mr. McAllister throws its multiple-viewpoint narrative badly out of whack, and its glee in punishing an errant protagonist subsequently became Payne's central preoccupation, thankfully toned down in Nebraska. The emphasis was still more on getting laughs at this point, though, so there's much to enjoy, from the deliberately unflattering freeze-frames to the repeated use of Morricone's Navajo Joe theme to signify Tracy's rage. And I'm quite proud that the Skandies awarded Best Actress to Witherspoon that year—it's a courageously dislikable performance, forcing us to identify with Mr. M against our will. I just wish Election let his ethical (or is it moral?) failure in the classroom speak for itself, rather than diluting it with extracurricular boners and making it play more like Erection.