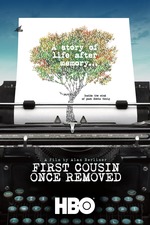 The deteriorating life of a poet, depicted poetically. I've been aware of Berliner since Nobody's Business played NYFF in 1996, but I never actually saw that film, in part because it looked maudlin in bare description. But then, so does this—Berliner interviews his elderly cousin, academic Edwin Honig, over a period of years as Alzheimer's gradually robs him of his memory—and the movie itself turns out to be thrillingly experimental, tossing every disease-of-the-week convention to the four winds. Right from the outset, Berliner rejects the easy pathos of the downward slide, fragmenting years of footage and multiple stages of dementia into an impressionistic mosaic; Honig often begins speaking a sentence in one year and completes it in another (not necessarily in chronological order), or delivers three varying responses to the same question in rat-a-tat parallel. Onscreen text coupled with typewriter sound effects provide exposition that simultaneously serves as counterpoint to what's happening visually at that moment. Archival footage is explicitly metaphorical and mostly unrelated to Honig's personal history. When Honig unexpectedly starts talking about the sky, Berliner uses it as a cue to explore the sea, which somehow seems devastatingly apropos. And none of this brilliant technique (which also includes some sublime collage work) effaces its subject's remarkable mind, with its heartbreaking, half-lucid observations and inventories. At one point, Honig launches into an impromptu disquisition on the trees outside his window, waxing eloquent and profound...except he can't remember the word for leaves. (I wish I could recall what he says, but imagine, say, someone spontaneously inventing "The quality of mercy is not strain'd; it droppeth as the, what is that wet stuff that falls from the sky? So gentle.") Even the film's title is at once literally true and thematically incisive. Were Honig a less dramatically compelling father and husband (in the O'Neill sense), First Cousin might have been a masterpiece; alas, he turns out to have been kind of a shit to his two adopted sons, both of whom have broken off contact with him, and the back half of the movie delves into this turbulent family history without ever quite integrating it with the Alzheimer's reverie (except maybe in the sense that there are some parts of his life that Honig, and we by extension, would rather forget). Still, this is what a documentary portrait made by a real artist looks like. Good job NYFF.

(I later expanded the above into a formal A.V. Club review.)