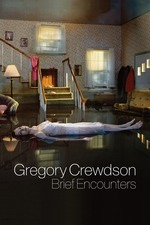 Half of this is standard portrait-of-the-artist puffery, and largely useless. But the other half is the most detailed depiction of the creative process I've ever seen, and endlessly fascinating. Because Crewdson's work is so intensely cinematic, watching him painstakingly engineer one of his photographs is like observing a single, indelible frame of a movie being born; it's a crash course in the art of composition, with additional notes on the roles of lighting, art direction, and production design. And if you're already familiar with some of these photos, seeing their subjects walking around behaving like normal people, and then later being dressed and positioned, is truly uncanny. (Imagine a movie that shows Roy Andersson creating some of the iconic shots in Songs From the Second Floor.) What amazed me most was the amount of effort and energy Crewdson expends on things that are barely even visible—at times I had to pause the film and pull up a larger image of the photo online to even see where something he's fixated on appears in the final image. Wish more time had been devoted to post-production, though, which is clearly a crucial element—there's something vaguely dispiriting about seeing objects get digitally accentuated or even removed, given how much time is spent trying to get everything absolutely perfect on the day of shooting.