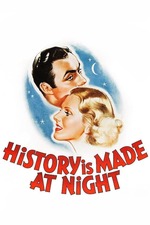 History Is Made at Night

Pure, uncut romance despite the invigorating intrusion of various other genres, from wrong-man melodrama to disaster flick. A lot depends on whether you're the sort of person who swoons at ludicrously elaborate pursuit, which in this case sees Boyer's "greatest headwaiter in the world" (a glorious reveal) abruptly relocate to New York and engineer the hottest new restaurant in town, reasoning that his beloved will walk through the door sooner or later. (And the "greatest chef in the world" volunteers to accompany him, abandoning his famed Paris bistro overnight, because why not?) Courtship scenes dare to be goofy—Arthur repeatedly stumbling on the dancefloor until she finally kicks off her shoes and goes barefoot; Boyer professing his interest via hand-drawn hand "puppet"—while Clive's jealous husband repeatedly crosses the line into emotional sadism and outright evil. Borzage takes both of these conflicting tones to their extreme, which somehow allows them to work in unison. Everything points toward a nobly downbeat ending (basically Titanic if Winslet died too), making the film's final minute feel like a ruinous betrayal. That's where the other half-star went.