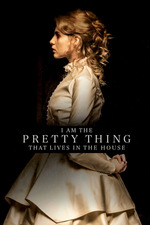 I Am the Pretty Thing That Lives in…

Won't quite make my top ten list for 2016, but if I compiled a separate list of the year's most singular films, it would be right at the top. If nothing else, I'll never forget the opening: an amorphous image that resists visual intelligibility for a disturbingly long time, accompanied by some of the most beautifully written (and delivered) voiceover narration in recent memory; it's as if Bill Morrison had adapted The Turn of the Screw. Pretty Thing's vibe isn't so much horror as pervasive dread, which never fails to raise every hair on my lower arms; the skeletal narrative that follows—virtually a solo performance by Ruth Wilson, just wandering around a dark house for an hour and a half—never modulates that unsettling tone, for better and worse. Mostly for better. Director Osgood Perkins stages one genuinely frightening setpiece early on, using a landline's phone cord to shivery effect, but that turns out to be anomalous. Barely audible whispers, not screams of terror, are the dominant sensibility here, and Perkins* creates a visual correlative by lighting everything in a way that calls to mind a monitor with its brightness turned down to roughly 10%. Wilson's expertly mannered performance, too, occupies a strange liminal zone between modern and Gothic. There's a mystery/backstory that completely fizzles, but that disappointment (which strongly influenced my overall opinion when I saw this, over a month ago) has receded in memory, while the clammy sensation of being gradually engulfed by a void has only grown. This is as creeped out by a movie as I've been in a long time.

* whose debut, February (since retitled The Blackcoat's Daughter), I bailed on at TIFF '15, but am now likely to give a second chance