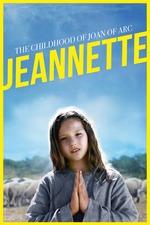 Suspect I'd have loved this had the entire film been Jeannette at age eight—which is to say, had this been Bruno Dumont's Bugsy Malone. Joan of Arc is so familiar that multiple levels of cognitive dissonance are required to penetrate our detached knowingness, even when chronicling "The Early Years" rather than the legend; I'd argue that placing Péguy's turgid dialogue in the mouths of small children renders it even stranger than does setting it to music. The combination of the two is formidable, and I didn't mind when adults showed up in the form of Madame Gervaise, since having twins jointly, simultaneously play a single character is plenty bizarre as well. When the film leapt forward to teen Jeannette, however, my engagement began to wane. Didn't seem quite as boldly amateurish anymore, and I became more conscious of small infelicities, e.g. how rarely "lyrics" and melody feel harmonic. (A problem for me with Dancer in the Dark as well—I suspect it speaks to the challenge of starting with someone else's atonal/arrhythmic prose, though Elton John certainly seemed to manage the task just fine.) Dumont's too much of a purist to vary this conceit in ways that would forestall monotony, and I reached the saturation point well before the film ended. Still one of the year's most singular experiences, though, and I'm always happy to see this particular filmmaker take a break from his brutish worldview.

AN HOUR LATER: It occurs to me that the above reads a tad incoherent—first I wish that Dumont had kept Jeannette a small child, then I complain that he doesn't vary his conceit enough. What I meant by the latter has more to do with the nature of the musical numbers, which are all "staged" (part of the initial charm lies in how absurd that word seems here) pretty much identically. As opposed to, say, London Road, which explores its central gimmick in a multitude of modes. It's entirely possible that I would have grown a bit weary of Jeannette even if the title character had remained eight years old throughout, due to this samey-ness; my first sentence merely theorizes that the extra degree of oddity might have forestalled disillusion. No way to know.

The Other Side of Hope