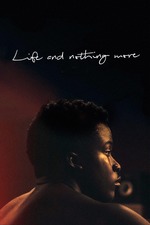 Might be underrating this, as it's mostly superb: a series of uninflected vignettes/impressions/conversations, variable in length (the shortest of them, which are plentiful and often consecutive, are like a non-comic version of what Baumbach and Gerwig have been doing lately), cumulatively creating a rich tapestry of African-American struggle and resilience. Much of the credit goes to Regina Williams, a non-pro who just owns the camera; the scene in which she methodically interrogates her persistent suitor outside a gas station, allowing him to gain ground in tiny increments, moving her body around a support post as if it were a shield, could (and should) be taught in acting classes. (I gather that much of the film was improvised. If so, hats off—beautifully controlled.) Indeed, she's so magnetic and compelling that Andrew Bleechington, who plays her teenage son, and with whom she more or less equally splits screen time, seems overly wan by comparison, despite the character's deliberately closed-off nature. Still, my main issue—and pretty much the only reason this film isn't on my top ten list—is the ending, which amounts to a sociological diagnosis that feels too reductive given everything that precedes it. Move that scene elsewhere, perhaps even just a few minutes earlier, and it'd feel much less didactic; landing there gives it so much weight that it almost comes across as implicit mom-blaming, which I'm sure was not anyone's intention. Especially regarding this mom. Do not miss one of the year's very best performances, folks. Downright stunning.