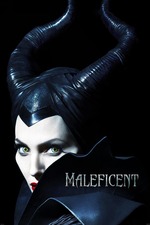 Okay, big disclaimer. I saw this with my dad on his birthday. (His idea, weirdly—better than Transformers, anyway.) The day before his birthday, by complete and horrible coincidence, two family members died. His sister Laurie had been in and out of the hospital for months following a car accident, and the family decided to take her off life support (which was her wish) after she deteriorated to the point where she had to be constantly sedated. That same morning, my cousin Wesley (on my dad's side; his brother's son) was found dead in his apartment at age 38, cause still unknown as I write this. No need to leave condolences in the comments; I appreciate the thought.

Anyway, Dad was emotionally wiped out and wanted nothing more than to turn off his brain for a while, so we wound up seeing three movies on his birthday. Maleficent was the first, and I don't entirely trust the strong emotional reaction it provoked in me—I spent a lot of the film on the verge of tears, but I don't really think the tears were about the film. We'd visited Laurie at the hospital a couple days earlier, and she was frail and small and effectively comatose, and a riff on Sleeping Beauty is automatically gonna resonate in that context.

At the same time, though, this film is doing something right, even if that only entails perfect casting in the two main roles. Fanning admittedly doesn't have much to do here, but all that's required is that she embody uncomplicated purity of heart, and there's no more guileless actor currently working. Placing her opposite someone who comes across as inhuman (as opposed to, say, Stephen Dorff's mildly self-absorbed dad) was inspired, and Jolie rises to the occasion with a magnificently stylized, ferocious performance that burrows into the darkest recesses of classic fairy tales—impressive, given that Maleficent was almost entirely invented by Disney. The film's ostensible feminist revisionism seems weirdly muddled, especially regarding King Stefan (what's with that finale?) and Prince Phillip (who really should just slink off and never be seen again after the kiss), but every scene involving Jolie and/or Fanning shook me on a primal level, and I can't ignore that. I can qualify it, however.

TL; DR: Mediocre movie may or may not be getting extra credit due to life circumstances.