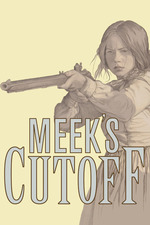 [originally written on my blog]

Just skimming the Metacritic blurbs threatens to render you comatose: "104 minutes of punishment"; "visually and emotionally severe"; "courts tedium"; "ponderously slow in pace"; "threaten[s] occasionally to stultify"; "there are stretches that are, frankly, boring." So why do I find it nonstop mesmerizing, even on second viewing? Above and beyond the strange tension Reichardt derives from the sheer arduousness of even simple tasks, there's a relaxed vigor to every shot that forestalls inattention, at least in my case. Other directors (most notably Van Sant) have employed the Academy ratio in recent years, but this is the first time it's seemed like more than an affectation—the boxy frame forces Reichardt to achieve certain "obvious" effects in unexpected ways, and so we get vibrant, precise compositions rather than generic vistas (plus such stunners as the dissolve that melds two radically different horizon lines). And even here, in a film notable for its fairly long takes, I find myself supremely alert to the deliberate use of contrast from one shot to the next, which in this case frequently involves a cut from blinding sunshine to darkness so nearly impenetrable that the actors can barely be seen, even when the film is properly projected. So the suggestion, made explicitly or implicitly by many folks I respect, that Meek's Cutoff is a respectable but faintly dull film that somehow "lacks juice" befuddles me on one level, even though I can see what they mean (in the sense that there's little in the way of action or high drama). I genuinely find it exciting, not worthy. Anyone who's shared more than one meal with me knows how much I hate vegetables of any kind.