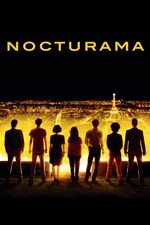 Second viewing, no change—though I struggled mightily to justify the ending, which I absolutely despised the first time...and still do, alas. Simply don't believe that the French equivalent of a SWAT team (the GIGN?) would kill terrorist suspects who are unmistakably surrendering; if nothing else, you want live bodies to question regarding other potential confederates and plots. Plays like facile one's-as-bad-as-the-other-(if-not-worse) didacticism à la Dead Man Walking. Since I otherwise love Nocturama almost with reservation, I actively sought some means of accepting this, and did notice two things that escaped me the first time: (1) a quick line of TV-news dialogue sets up the execution-style police action, noting that our "heroes" have been classified as enemies of the state rather than terrorists, and (2) one of the terrorists places Semtex near the entrance, where the cops might well have seen it. (There's no detonator, but they have no way of knowing that.) It does seem plausible that you'd shoot to kill on sight if any one of these kids might suddenly blow up the entire building. Actually watching them get gunned down again, though, made any such rationalization impossible. Nobody even vaguely looks like an ongoing threat. It's deliberate false equivalency, scoring easy points, and it cheapens the movie.

Which, again, looks like a million bucks in every other respect. I never wrote it (or much of anything else) up from TIFF '16, and now I've spent too much time detailing my one big beef, so forgive me for just piggybacking onto Ignatiy's review, which expertly conveys Bonello's formal mastery and aptly dismisses naysayers' ideological misgivings. ("Perhaps a lesser movie might take pains to show that the people behind it understand that terrorism is, in fact, bad. Of course, if this is something a viewer needs explained to them, then they have problems that no French art film, however awesome, is going to solve.") I'll only add: Rewatching it convinced me that nothing merits the (admittedly somewhat dopey) phrase "pure cinema" more reliably than the heist movie. Nocturama technically isn't one, but the mechanics are roughly the same, and every bit as tensely thrilling; seeing that near-silent kineticism shifted from stealing unknown people's money to endangering unknown people's lives, in the service of we don't even really know what (apart from some vague Nuit debout-ish rhetoric), provokes thought in all the right ways, even before the film turns into Dawn of the Dubious.