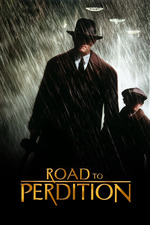 Third viewing, down just a touch from 75. Among my peer group, at least, this is a very uncool movie to champion—its most recent analogue is probably Motherless Brooklyn, which I liked considerably more (rating: 60) than did most of my friends who saw it. Both are very serious without being particularly incisive or at all challenging, which is to say that they're essentially middlebrow. But those films have their pleasures, and this one still keeps me in its grip throughout, despite a sometimes overbearing Thomas Newman score (which really bugged me this time and largely accounts for the slight downgrade), some garbage voiceover (confined to the beginning and end, thankfully), and that goofy bank-robbing montage (don't know what Mendes was thinking, honestly). This Scenic Routes column lays out my case for the defense better than does my full Time Out New York review, but here that is too:

Saddled with a title that calls to mind SCTV's Dave Thomas and Joe Flaherty as Bob Hope and Bing Crosby ("Say, which circle of hell do you suppose this is, anyway?"), Road to Perdition seems wildly out of place amid the summer's usual smorgasbord of sequels, remakes and other brain-dead excuses to both literally and figuratively chill out. Still, a tuxedo can inspire admiration even at a clambake, provided that you know how to wear it. Sam Mendes's preternatural self- confidence behind the lens fits any occasion, every season. So striking and evocative was his direction of American Beauty, in fact, that many critics and Oscar voters were snowed into thinking the film had something profound to say about suburban malaise. Road to Perdition, adapted from a graphic novel by Max Allan Collins, is even better—a crackerjack yarn delivered with more than enough conviction and panache to compensate for the occasional fit of self-importance.

As you've probably heard, Perdition represents something of a departure for Hanks, who plays a hit man for the Irish mob in Capone-era Chicago. As departures go, however, this one doesn't get much further than the next block, since Hanks's character, Michael Sullivan, is perhaps the noblest, kindliest and most sympathetic hit man in motion picture history. Yes, Sullivan kills people for a living—but not wantonly or indiscriminately, and mostly out of loyalty to aging gangster John Rooney (Paul Newman), who gave him a home and took on the role of surrogate father, to the intense irritation of Rooney's biological son, Connor (Daniel Craig). Through a series of events too exciting and suspenseful to reveal, Sullivan winds up on the run with his eldest son, Michael Jr. (newcomer Tyler Hoechlin), pursued by a serenely creepy assassin (Jude Law) who moonlights as a photographer of corpses—including those he creates.

Like most Hollywood films, Perdition errs on the side of spelling everything out as if we were cretins, cramming its filial theme down our collective throat both in the dialogue and (more egregiously) via superfluous voiceover narration. But screenwriter David Self (Thirteen Days) has retained the propulsive narrative energy of Collins's novel, even as he has expunged its pulpier aspects (which are effective enough in comic-book form but difficult to translate to the screen with a straight face). And Mendes, seemingly unfazed by the pressure of heightened expectations, performs offhanded miracles in every scene, coaxing indelible performances from even his bit players and investing potentially hokey material with ferocious conviction and dynamism. You will need to know what happens next. Maybe this is a summer movie after all....