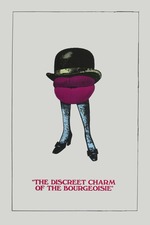 When I first heard the title, I thought, "Finally! Someone's going to tell the truth about the bourgeoisie!" What a disappointment. It would be hard to imagine a less fair or, or accurate portrait.

Hard to quantify the cumulative satirical force this movie brings to bear, as it maintains the same level of genial drollery from start to finish. I always start out mildly amused, wind up gobsmacked...but it seems entirely possible that shuffling the scenes at random would have much the same effect. It's just a single pointed joke that gets funnier and funnier, abetted by a sextet of actors who refrain from any winking or nudging—Bulle Ogier in particular achieves maximum vacuity without calling attention to herself in any way, but they all embody entitlement with zero fuss. Furthermore, the meal-that-never-happens conceit provides an ostensible structure that gives Buñuel license to digress at will, indulging in Russian-doll dream sequences and self-contained short stories narrated by minor characters. It's all simultaneously scathing and delightful, a potent combination that's very rarely attempted and virtually never as expertly sustained as it is here. Still, there's something more, some je ne sais quoi that elevates Discreet Charm well above The Exterminating Angel or The Phantom of Liberty and lands it among my 30 or so favorite films of all time. (I had it in the top ten at one point.) And that element stubbornly resists explication, as perhaps it should. Maybe other folks have come up with firm interpretations of the interstitial (and concluding) sequences depicting the characters walking silently along a deserted country road to some unknown destination, or to no destination whatsoever; I can't tell you what they "mean," and sort of recoil at the very idea of meaning. Just the sound of their footsteps on gravel seems to be, as Margaret's Ramon would say, "a perfect little encapsule."