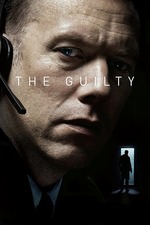 Does a solid if unremarkable job of sustaining visual interest while confined to a single bland location, and generates considerable suspense from noises heard tinnily through the protagonist's earpiece. Lead actor Jakob Cedergren (who'd previously wowed me in Malmros' Sorrow and Joy) is otherwise the whole show, and he deftly ricochets between testy entitlement and sincere compassion, with the latter somehow gradually becoming even more unprofessional than the former. Vague allusions to some past malfeasance worried me, but I wound up quite liking the way Möller and co-writer Emil Nygaard Albertsen eventually tie that revelation into the present-tense drama. My one sizable reservation—yes, I fear I must Go There—involves basic plausibility. I can rationalize (with some effort) each of the multiple choices made by others that conspire to create the wrong impression, and I'm well aware that Asger's penchant for jumping to conclusions and ignoring contradictory evidence is the whole point. But there are just too many independent unlikely events, all of which have to occur in order for even a blinkered antihero to screw things up this badly. Thought Möller had won me back over at the end, but then he adds a cheap additional misdirection (for which I did not fall), and I got annoyed at the contrivance again. Crackerjack feature debut, though.