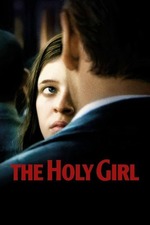 Thought this would reveal itself as a near-masterpiece on second viewing, given the way that it expanded and lingered in my head following its Cannes premiere, but the epiphany never came. Still a very good film, accumulating force through tiny, offhand details and culminating in a structural tour de force that's at once liberating and unnerving. (Great final shots are tricky, rare and cherishable; this was one of those instances where I found myself silently chanting "End. End. End. End" and felt ecstatic and grateful when my wish came true.) Martel comes up with one striking composition after another, coaxes beautifully inflected performances from her actors (though the girl playing Amalia mostly just needed to bring her sullenly voluptuous face to the set every day—what a casting coup), and—best of all—never once succumbs to the mannered somnolence that made her debut, La Ciénaga, such an impressive chore to sit through. This is a huge leap forward. At bottom, though, The Holy Girl, in its conflation of/confusion between faith and desire, shares the same basic concerns as any Prince album, and those two or three songs (read: scenes, moments, ideas) that transform an otherwise solid effort into an enduring classic are nowhere to be found.