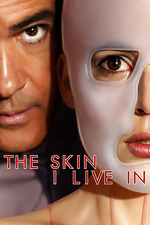 [originally written as part of my A.V. Club coverage of Cannes 2011]

If This Must Be the Place is a movie that doesn’t especially care about its ludicrous plot, Pedro Almodóvar’s new film, The Skin I Live In, cares about nothing but its ludicrous plot. Which presents a bit of a challenge for anyone reviewing it, as it would be cruel to reveal too much about what happens, yet there’s nothing much else to talk about—except perhaps to note that the film’s subject matter reflects the lifelong preoccupations of a gay film director obsessed with women. Antonio Banderas, working with Almodóvar for the first time since 1990’s Tie Me Up! Tie Me Down!, plays a brilliant but deranged surgeon who maintains an operating room on his private estate and performs regular procedures on a beautiful young woman (Elena Anaya). All we know at the outset is that Banderas has created an unusually strong artificial skin, driven to the task after his wife died in a fire, and that the young woman seems to be held captive in his house, with the complicity of his housekeeper (Marisa Paredes). And that’s really all I ought to tell you, because the only real charge this movie offers is the gradual and increasingly fucked-up reveal of what’s actually going on. (If you have a guess based on the above description, trust me: Nope.) There’s no emotional subtext to the outré scenario, no sense that this lunacy reflects feelings too strong to be contained by an ordinary narrative; at the precise instant that the film threatens to address something real, it promptly ends. If you took a Weekly World News cover story and tried to reverse-engineer a screenplay from the headline, it might look something like The Skin I Live In. I wanted more.

Once Upon a Time in Anatolia