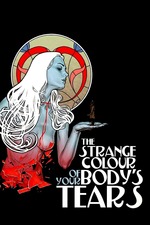 Delectably Amer-ican for the first half hour or so, in part because every new person the protagonist meets launches into a story, depicted in crazily stylized digressive interludes. (The one with the elderly couple and the hole in the ceiling is all kinds of dementedly virtuosic.) Alas, Forzani and Cattet eventually commit to their meaningless narrative, at which point the movie becomes a really bad case of diminishing returns, feeling much longer than it is. Clearly they can't do a sustained story, so unless they can devise a bunch of ways to build features from vignettes, that may be it.