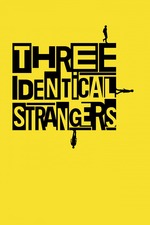 A.V. Club review. I didn't know this story and it is certifiably nuts. More importantly, it's an insane story that's well served by a filmed treatment (even though, as my friend Vadim pointed out, virtually all of the information was public record 20 years ago), and particularly by director Tim Wardle's decision to interview Robert and David separately for most of the movie, denying us not just the side-by-side view we crave (and do eventually get) but even many direct cuts from one to the other. Wardle overreaches with his "nurture trumps nature" conclusion as it relates to Eddy's sad fate (not a spoiler; you can tell both from his absence and from the way he's spoken of that bad news is lurking), but that barely matters, because the images are doing the necessary work without any assistance. I defy anyone to consistently and correctly identify which brother is which in the early stills (at least once David grows his hair out to match the other two; incidentally, that's exactly what my own hair looked like at that age, R.I.P. Brillohead), while nobody could possibly mistake Robert and David today, even for an instant. That's the truly profound story here, conveyed in a whisper.