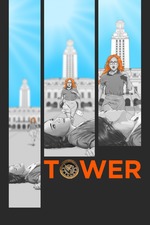 Second viewing, no change. Tried to comprehend the objections of a few friends who are troubled by the use of rotoscoping and/or (very briefly) rock music, and just didn't see anything remotely exploitative or unseemly. The nonstop emphasis on courage and selflessness in the face of inexplicable horror could hardly be further removed from ghoulishness*, and again repeatedly moved me to tears. Still think Maitland brings the real subjects in way too early, but I see now why he made that choice—the cut from "I guess this is it" (spoken by the young actor playing Claire, animated) to "I guess this is the end" (spoken by the elderly actual Claire, live-action) has exactly the right lacerating effect, and the film's strict chronological approach precludes delaying that moment until later. Fair tradeoff, I guess.

* Also worth noting: Whitman is so completely effaced that Tower doesn't even show him at the moment that he's gunned down. Not the approach you'd take if your primary goal were to satisfy the audience's bloodlust.