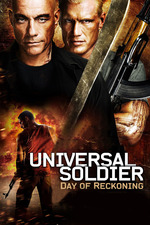 An astonishing cinematic Brundlefly, as if copies of the Universal Soldier franchise had accidentally gotten into the telepod alongside the complete works of Noé, Lynch and the Wachowskis. First two reels are virtually nonstop abstraction, disorienting and ominous; even without having seen any of the previous installments, I could tell that bearings were in deliberately short supply. Then the ass-kicking commences, so singlemindedly ferocious that all you can do is gape. Because the initial raves came from many of the same folks who think Tony Scott was Hollywood's one true genius, I admit that I had a bit of a chip on my shoulder going in, but Hyams knocked it off almost immediately. He excels—and this is rare—at both kineticism and stillness, orchestrating mayhem with the spatial dexterity of an old pro but also somehow managing to sit two very mediocre actors across a table from each other and derive real tension from their banal conversation, just by lighting the room effectively and punctuating sentences with the suggestion of headlights from traffic just outside. Truly, the only thing holding this sucker back from greatness is the bothersome fact that it's a Universal Soldier sequel—every so often, Hyams and his co-writers clearly feel obligated to acknowledge expectations, trotting out Van Damme and Lundgren for what amount to weary cameos. It's never more than lip service, though, and the next self-sufficient, eye-popping setpiece is never more than a few minutes away. Hopefully, the hype will allow Hyams to make something that'll function like a proper movie next time, rather than "pardon me while I Bogart this series to create one helluva two-hour demo reel."