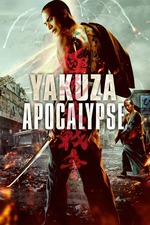 [Originally written from Cannes '15 for The Dissolve.]

Frankly, it was worth flying to Cannes just to witness the giant frog make an unexpected personal appearance during the closing credits of Yakuza Apocalypse. Takashi Miike’s 257,962nd feature film (this year) received a Special Screening in the Directors’ Fortnight, which basically means that they couldn’t quite justify including it in the lineup proper, but also couldn’t bear the thought of not showing it. I trashed my entire schedule yesterday to accommodate the one and only screening. No regrets.

At first, it’s unclear why the movie isn’t called Yakuza Vampire Apocalypse, as the gloriously silly plot kicks off when a newly recruited gangster named Kageyama (Hayato Ichihara) discovers that his boss (Lily Franky, who also appeared in Kore-eda’s Our Little Sister earlier in the fest) feeds on the blood of other yakuza. Vampires, however, turn out to be the most mundane aspect of this batshit-crazy saga, which also features a guy with a turtle shell on his back and a duck’s bill for a mouth; a woman whose brains appear to be leaking out of her ears; a basement full of burly human sacrifices who are learning to knit while they wait for their turn; and a secret message that, when decoded, implores the hero to “STAY FOOLISH.” Meanwhile, all of the characters keep worrying about the impending arrival of some terrifying badass, who finally arrives in the form of a martial artist wearing a huge full-body frog costume—the kind of thing you might see at a theme park. (He can beat the shit out of everyone, but he still needs assistance going up and down stairs.) When the frog showed up in “person” at the end of the movie, he got the heartiest standing ovation I’ve seen at Cannes in years. Yakuza Apocalypse itself isn’t ovation-worthy—“patchy” would be putting it kindly, and two hours of this sort of random nonsense is at least half an hour too much—but it’s Miike at his most gleefully lunatic, and that’s always a hoot and a half. I think I’d have to go back to Gozu (which also played the Fortnight, in 2003) to find a comparable degree of insanity in his oeuvre. But, then, I’ve only managed to see 112,344 of his films so far.