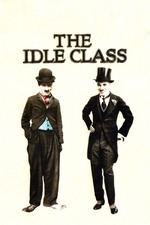 a charming enough showcase for chaplin's tramp, displaying his absolute dedication to self-preservation at the cost of others, his penchant for romantic sentiment, and his often beautiful physicality. it's everything that is wonderful and problematic about chaplin all wrapped up in a quick satire of upper class foibles. while admitting that i am still something of a novice in chaplin's giant oeuvre, i find it rather odd that he is often called a humanist even as a large chunk of the humor in his works comes from the tramp abandoning others to awful fates for the sake of saving his own skin. in many ways the tramp is not a terribly likable character, and many of the film's other characters are painted with an even broader brush. still, it is funny, and the observations about the upper class' obsessions with maintaining order and playing by rules (especially in an extended golf sequence) remain fresh and relatively modern, if not exactly deeply probing.