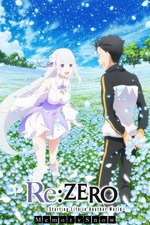 This isn't for the whole series but I'm going to act like it is to say what a pleasant surprise it's been.

It's another one I started the dub of solely because Zeno Robinson was voicing a character that looked incredibly up my alley (and he is), but before I even got to his character I fell in love with it. It's such a unique mix of beautiful and harrowing, the viciousness that jumps out is always shocking but with reason: traumatizing the fuck out of Subaru. Which sounds cruel! But what I really love is how this show addresses trauma in it's cis straight male protag, letting him cry, letting him break down, letting him express the darkly depressed and even sometimes suicidal ideations he's fighting. For a while he reacts exceedingly poorly, he's nasty and says a lot of shitty things to the women in his life (of which there are A LOT of various personalities and depth!), BUT GUESS WHAT he's called out on it. He learns from it, he apologies, and he becomes a better person.

That's cool as fuck! It's REALLY really satisfying to see, because it rarely happens with a male main character.

There are so many side characters and main ones alike that I've come to adore, and while it definitely has some of the more typical over sexualizing of girls, there's still ultimately a LOT of good here. I'm excited for it to return.

Re:ZERO -Starting Life in Another World- The Frozen…