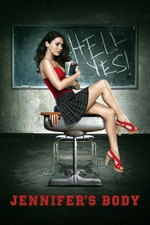 But while this movie has been written off as a trashy failed experiment in horror comedy, it's actually a thoughtful, perceptive, and scary examination of what it means to be a teenage girl. You could see its two main characters, Jennifer and Needy, as stereotypes; at first glance, they look like the archetypal teen girl characters, the slut and the nerd. But they're so much more than that, and anyone who's ever been a teenager will identify with their intense emotions, their ridiculous jealousy, and their constant, desperate, crushing need for approval.

I'm all for making movies shorter, in general, but I actually think the extended cut of Jennifer's Body is worthwhile. Many of the scenes that were trimmed from the theatrical cut focus on the grieving parents of Jennifer's victims, which means we can't just write them off as the stupid teenagers who populate every slasher movie since the dawn of time. Their deaths aren't meaningless; they have an effect on their families, and you can feel the mood of the whole town change as the movie progresses. There are also extra scenes spent with the goth clique, which are hilarious but, again, change the dynamic of several relationships, and add weight to characters' deaths. The all-important scene at the bar at the beginning of the film is also longer in this version, and again, it adds emotional weight to the film; you really feel how dangerous things are, and it's actually scary.

Which isn't to say that the theatrical cut is bad, because I loved it that way first. I love how well-written the characters are - yes, the dialogue is stylised, but have you listened to how people talk, ever? I love how fantastic the actors are; Amanda Seyfried is great, as always, but she doesn't outshine the rest of the cast, which includes Johnny Simmons as Needy's adorable boyfriend, Kyle Gallner as the believeably goth Colin Gray, and Adam Brody as the amazingly evil Nikolai. And, of course, Megan Fox, who is perfect in this movie and no, I don't want to hear a word against her.

More than anything, I love how this movie looks. The direction is slick and interesting, and the actual photography is frequently breathtaking. None of that shitty orange and teal washed out crap here; Jennifer's Body goes for bright, over-saturated colours instead, and it's beautiful. That shot of Needy in her magenta princess dress, running through the dark forest with her blonde hair streaming behind her, gives me goosebumps every time.

I don't think I could trust the opinion of anyone who doesn't love this movie. It's wonderful.