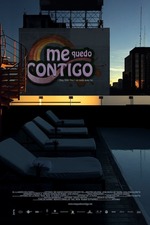 You know you're in for something special when the film has an introduction by the EIFF's art director to say "If you do not like extreme onscreen violence I recommend you leave now and get a refund". The woman in front of us leaned over to her partner and hissed "oh no". I knew they wouldn't last long.

I would say at least 50% of the audience left this film which is a terrible shame as I'm sure they have an awful opinion of it and some images that they can't shake because they made no sense. After the screening the director did some Q&As and I am so glad I stayed for them as they alone helped shape my opinion and give context as to the hows and whys.

I Stay With You follows a Spanish woman who is asked by her boyfriend to come visit and stay with him in Mexico. When she arrives he is working so she tries to spend her time resting recovering from jetlag but there is an annoying flatmate who keeps bugging her. Finally she heads out to meet a friend who introduces her to her mates and soon we have a quartet of women out partying.

If that sounds tame it is. It's a false sense of security however as while partying her friends, without warning, kidnap a man, take her back to their apartment and go all Funny Games on him. Like From Dusk Till Dawn the first half does not match the second and if I was to sum up this film I would say it was Sex and the City meets Reservoir Dogs.

I apologise if the above has spoilers in it. I'm of the opinion this film may never actually be released so you may never get the chance to see it anyway!

This is the director's first film and a lot of his previous work as an installation artist came across in I Stay With You. There were agonisingly long takes which were hard to sit through and the whole film felt like it needed someone to explain some context about it first - as with a good chunk of modern art.

In the Q&A a lot of this context was covered. Sure, it was horrible but helped me make sense of it. In Mexico it appears there is a trend for groups of men to kidnap a woman, do what they like with her, then leave her at dawn (usually dead). I Stay With You is a gender reversal of this and offers a biting commentary on expectations of woman's roles in film.

I Stay With You is about violence from the start. Most of the violence is so ingrained in our day to day lives that we don't question it and with each step the film takes us closer to the unacceptable. For example, the letter she receives at the start is passive aggressive violence from her boyfriend basically saying "hey, I don't care what you're doing - come see me as what I'm doing is important and I want you". We take that kind of implied violence every day in film and in life.

Okay, I've written loads on this and none of you are going to read it anyway so I'll leave it there. If you get a chance to see it I would definitely recommend it.

Erm, so long as you're okay with a lot of female on male violence.