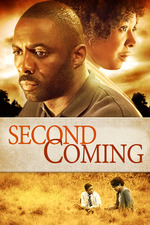 This is an absolute gut puncher of a film. It's about a woman who falls pregnant and begins to experience visions that suggest her baby will be the second coming. Is she crazy? How will her partner react to the news as they've not been intimate in so long?

Considering it's only one hour forty long it stretches every scene. Long, meandering handheld shots that often never show us what is really taking place in the scene - we have to read much of the dialogue in the characters eyes. The editing is phenomenal and often leaves dialogue from future scenes running over current scenes then jumpcuts to catch up.

I had a really emotional experience here. I still feel sick after watching it. Not just for the carefully realised domestic life Debbie Tucker Green manages to capture but also from the shocking sense of loneliness Nadine Marshall's character comes under as everyone starts to turn against her. Additional content around getting pregnant after previous miscarriages all hit close to home personally and I found the emotional weight of the film almost too much to bear at times.

Definitely one for a mature audience - if I'd seen this when I was younger I would have thought it was boring rubbish. I'm sorry to say but it feels like one where you need a bit of life experience for many of the themes here to resonate.