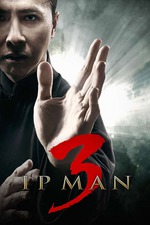 "ip 3" isn't a bad movie so much as it's an insane offender of the cardinal sin of martials arts flicks: it's borderline nonsensical plot is not made up for with inversely good action.

there is just enough for the martial arts die-hard to enjoy, the elevator scene is one of the best fights in the series, the "10 Man" trope gets elevated to a very entertaining action set piece, and the mike tyson fight has enough novelty to be enjoyable, but it's worth considering the "western pugilism vs eastern martial arts" bit was done better and to greater effect in "ip 2". every other fight is completely lackluster and the ending fight is borderline embarrassing when you consider this series' pedigree.

also a bit of advice for anyone making martial arts films: dont try to "do" bruce lee. it doesn't matter how much the guy you got looks like him or moves like him, the man was literally one of a kind and anytime you see someone try to depict him it gives me that gross "uncanny valley" feeling they when they try to digitally de-age an actor. feels insanely fake.