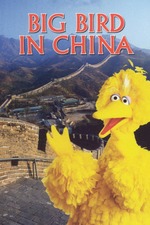 Big Bird Sure Travels a Lot For a Child

Since this point, Big Bird (Caroll Spinney) has been a big deal in China. According to Spinney's autobiography, when Sesame Street does foreign versions, they don't do the original characters. They create all new characters for every version, because you can't have duplicates. That would just be weird. However, the Chinese insisted on Big Bird, called Da Niao in Mandarin, as part of their version, because he somehow became the most popular thing going after he visited there. (I don't think they're all that into Barkley [Brian Muehl].) They even brought him back to China to help choose the Chinese puppeteer who would be doing Da Niao on the show. This includes an interesting discussion on the differences between American and traditional Chinese puppetry. I'd recommend reading the book, but I'm not sure it's still in print. My copy is signed, too, so I'm not sharing it.

Big Bird has become fascinated with a scroll of a phoenix that's on display in Chinatown. He decides that he and Barkley should go to China and meet the Phoenix, the Empress of the Southern Sky, so she can tell him all about China and he can tell everyone on Sesame Street everything he's learned. So off they go. He has borrowed the old and valuable scroll, which has images of the places he needs to find. Unfortunately, while there are a billion people in China, they don't, for the most part, speak English. Fortunately, he encounters young Xiao Foo (Lianzi Ouyang), who does speak English and who helps him find the places shown on the scroll, starting with the Great Wall. There to pass them clues is the Monkey King (Chou Yi-Ping, Liu Xio-Shen, Zhang Xin-Tien, Xu Tien-Ed, Quan She-Zhen, Li Jiang, Lu Fu-Hai and Wu Chi-Lian--seriously). He gives Barkley an hourglass, and when the sand runs out, they will run out of time to find the Phoenix.

There's a brief and random subplot wherein Oscar (also Spinney) convinces Telly (originally Brian Muehl and now dubbed with Martin P. Robinson for the DVD) to dig to China. Now, there's the issue that I don't know how Big Bird pays for his flight, which you have to admit is a legitimate question. Oscar's got a pretty big place and a cab business when they feel he should have one; Oscar can afford a flight. Big Bird is six. So yeah. Still, when Graham asked why that happened, the only answer I had was that it wouldn't be a Sesame Street special without Oscar screwing someone over. This isn't entirely true--I don't think he appears in the one where Big Bird goes to Japan--but it's pretty standard. Oscar is the dark id of Sesame Street, and he takes pleasure in what the children would do if they could get away with it. So, okay, digging to China. Or, more accurately, making Telly dig to China.

The thing about anything with Muppets in it is what you ignore to let the story work. Big Bird shouldn't have a passport; certainly Big Bird shouldn't have the money for an international flight accompanied only by a very large dog. Who, it's worth noting--because these are Muppets--isn't even a talking dog. What's more, China is actually larger than the United States, so it should take considerable amounts of time to get to the places he sees if they're any kind of representative of China. (IMDb helpfully lists "China" under filming locations.) Big Bird is shown driving a motorcycle at some point, which I'm not entirely comfortable with. We never see Xiao Foo's family, just her teacher, but she goes traipsing about China with a pair of American strangers and no one blinks an eye. I mean, okay, it's a noble Chinese quest to learn more about China, but still. We just kind of let all this go, because Muppets--and in particular because Sesame Street--but think about it and it kind of falls apart.

This is also completely refusing to get into the excesses of the Chinese government, of course, because the Chinese government basically isn't a thing in this. We see Mao's tomb, but mostly, just the Chinese people and the Chinese landscapes. Then again, I think one of the best ways to create peace among nations is to get kids to learn as much as possible about as many places as possible. It's hard to fear China if you grew up watching Xiao Foo on PBS about once a year. Of course, while I did indeed watch this on PBS many times as a child, another thing I'm pretty sure I watched on PBS was live footage not too many years after this of the protests and subsequent massacre in Tiananmen Square, which I'm pretty sure is one of the locations in this movie. (Though thanks, IMDb, for not actually confirming that for me.) Learning about a country isn't just learning about the nice bits, though I think the nice bits are sufficient when you're Big Bird's age. Which I pretty much was, when this was made.