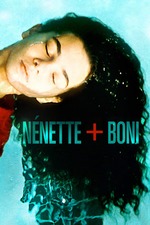 Even better than I remembered. Denis' practice of cutting without signposting from "objective"/real to "subjective"/fantasy scenes or shots is born here (it recalls Buñuel but is more radical)--reaching its peak in BEAU TRAVAIL and L'INTRUS. Also, the first Denis film with a strong sense of humor: the scenes of Colin fantasizing about "la boulangère" have a hilarious, hyperbolic mise en scène (pink and powder blue predominate--as do soft, satin- and fur-like textures). Best sonic detail: Colin concludes his erotic reverie in bed (a fantasy that has been accompanied by a slightly mystifying gurgling sound), and then, with a big smile on his face, reaches over and gently strokes his new (stolen) Krups coffeemaker--which, all along, has been the source of the incongruous sound. So funny. Docked a half-star for an absurd reason: it is a film that is literally in the shadow of (because it immediately preceded) one of the greatest works in all of cinema, BEAU TRAVAIL.