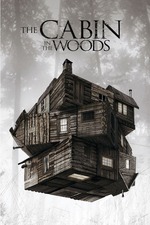 Formula. Every film has one. Watch enough films and you learn the formulas, perhaps even subconciously; and it can ruin the film for you. It drains a film of tension, it makes a film predictable. And in no other genre is the formula more apparent than in horror.

The Cabin In The Woods (TCITW)has a formula too. It is no different to any other film in that respect. But while your Texas Chainsaw Massacres and your Excorcists and your Last Houses On The Lefts say 2 + 2 = 4, TCITW says, "Yes, it does equal 4 but did you know that this 2 is actually 0.5 plus 2.5 minus 1 and the second 2 is really a shit ton of fun divided by an understanding of every horror trope , which we subvert and celebrate at the same time. I'm not too great at maths so I may have strayed off path there but you get the idea. Your understanding of the rules will not ruin this film for you; it will make it better.

Scream was the first horror film to play with the rules of horror; to play upon your expectations. This is a hundred times the film that scream was and it takes that level of playfulness and turns the dial up to 11 and then all the way around till the dial breaks off in your hand.

What you think you know about this film: you don't.

And that's the best way to see it. Don't watch any trailers, don't read any online reviews that might spoil it; go in blind with an open mind and I'll promise you this: you'll jump, you'll laugh, you'll cover your eyes; you'll laugh again, you'll gasp, you'll still be laughing and at the end you'll say "I've NEVER seen anything like that before."
I can't remeber when I saw a horror film that didn't talk down to me, or treat me like an idiot, or bore me senseless or wink at me so hard that my hair flew back - I can't remember when a horror film....treated me (and itself) with inteligence.

I can't review this plot without spoiling the fun (and it really, really is fun; it's a horror but damn, it's almost a comedy at times) but I urge you to see this in the cinema, with an audience. It's an experience movie; watching a fuzzy download on a laptop will NOT do this film justice and this deserves to do crazy money at the box office.

If I can say one thing other than how fun it is it's this: Richard Jenkins & Bradley Whitford are in this. That alone should be enough to guarantee your ticket but these two play characters that should become horror legends. People should be cosplaying as these guys, writing fan-fiction about them, coming up with elaborate back stories. It would still have been a great movie had they not been cast in their roles but with them? It's a modern classic.

Book your tickets for this now.