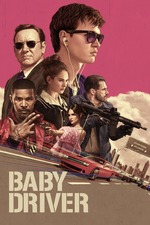 This is the worst movie Edgar Wright has ever made.

That also makes it better than 99.9% of movies ever made.

Don't be fooled: this is the first of Wright's films that doesn't feel like a cohesive smoothly executed whole film. There are definitely problems here. But no matter what issues the film has, it's able to supersede them with the truly brilliant direction and kinetic pace that Wright has become known for. He's lost none of that.

Baby Driver ultimately becomes what every one of Wright's films becomes: a self aware, post-post modern referendum on a familiar plotline, being updated and filled with the kind of 21st century vitality these formerly tired storylines need. Each of his films have done this in some way. It doesn't do it as well as The World's End (which definitively closed the book on alien invasion movies so hard that it might very well be impossible to attempt it ever again), or even Shaun of the Dead's "manchild learns responsibility through confronting zombies, here being the literal representation of his own obsessive consumerism" basic structure.

It basically takes the exact plot of Drive (near mute driver, waitress in need, genial boss who is secretly demented, one last job), which itself was Michael Mann's Thief and others twisted into a somewhat arthouse format, and turns it into a surrealist and demented pseudo-musical.

But Wright's weaknesses as a writer, which Simon Pegg tended to be able to complement nicely, go full force here as well, resulting in hysterically underwritten female characters and an ending that ultimately falls flat and kinda undercuts any emotional resonance the film could have.

But to watch Wright conduct his sequences, the way that he transitions from a wild car chase with real stunts to an elaborate musical number where the graffiti on the walls is the same as the lyrics that our hero Baby is listening to, all in one take...Jesus fuck, as a visual artist Wright is close to Spielberg levels of great in this department.

And there's a surprising amount of physical comedy in this, and the way that the stock character of the strong-but-silent driver is subverted. Ansel Elgort's Baby is strangely effeminate when such a role is normally played by manly men (Ryan Gosling hit a good medium with this), prancing his way across the apartment after a successful job and fluently cooking his deaf legal guardian breakfast in one fell swoop. I had fully expected to dislike Elgort in this (considering he really hasn't delivered anything better than decent in his short career), but Wright really did see something in him, and I gotta admit that he absolutely floored me here.

Baby is probably Wright's most morally complex character to date, with a backstory that seems awfully similar to Chris Pratt's Star-Lord. Unlike Wright's other protagonists (manchildren in need of growing up), Baby is the the most responsible one for a change. He takes care of his legal guardian, robbing and stealing only to provide for him. He's severely antisocial in most cases, clearly expresses his dislike and contempt for most, but not in the pretentious Zach Braff way, but in a way that makes him act more like a guarded and wounded animal than a pompous asshat. There's real vulnerability and hurt in his eyes, and yet he has found refuge in pop culture, acting the way a child would imitate his favorite characters. It's a kid imitating what he thinks Ryan Gosling would do.

The big shame of it all is that only Elgort and his co-star, Lily James, seem to have come prepared for this particular ball game. No performance in the film is outright bad, mind you, but it's clear everyone but them wanted to riff on the source material and not take it seriously. Kevin Spacey, Jamie Foxx and Jon Hamm go the farthest out of this group, but even they still act as though it's a comedy (and do provide the best punchlines), not really understanding that this is Wright's least outright comedic film to date. Spacey clearly relishes the rat-a-tat-tat dialogue he's given ("Mozart on a go-kart," "drowning out the hum in the drum," he's got some gems), and Hamm plays a rather inconsistent role alternating between wannabe father figure and outright lunatic. Foxx goes full scenery-chewing craziness here, playing a complete cartoon of a character who is hysterical to watch, but contrasts poorly with everyone else.

I think Wright wanted to have his cake and eat it too. He wanted both the silliness of taking this tired genre to task and also saying something meaningful about the way that pop culture can distort our view of reality while still being an essential aspect of our daily lives. His love for the genre is apparent, the soundtrack is impeccable, and the film cuts to it like nothing I've ever seen. Yet Lily James' Debora clearly has some depth to her that Wright has no interest exploring (she's ironically the one with the mysterious past here), she falls in love with Elgort within seconds of meeting him in a meet-cute scene that feels fake and forced. Luckily, their chemistry significantly improves in subsequent scenes, in a virtuoso bit of direction involving laundry machines spinning in unison while Baby and Debora's feet tap in rhythm, slowly transitioning to a record being spun in the border of the laundry machine. It's an elaborate and surreal sequence, and it's a delight to witness Wright in these quiet moments.

The film's funniest line is its most poignant, when Spacey confronts Elgort about how he always try to reassure him with movie quotes, how most of what he says is what he hears in movies. We see repeated instances of Elgort watching movies and then repeating the quotes when necessary. My favorite thing about Baby Driver is in the subtle ways that Wright either intentionally or unintentionally takes tiny aspects from other films to incorporate into his own. Elgort quotes what he sees on television the way the Dude did in The Big Lebowski, while a confrontation with Hamm is filmed like the first scene of Blade Runner. Elgort is a victim of pop culture, yet empowered by it at the same time. He creates soundtracks for his heists, the same way a movie is scored. He creates remixes of the conversations his coworkers share, the only way he knows how to relate to human emotion. He's so utterly disconnected by pop culture and yet it's his encyclopedic knowledge of it that ultimately allows two lonely (and improbably attractive) souls to find one another. I don't think it's an accident that Debora's uniform and work looks way too much like Twin Peaks for it to be a coincidence.

Baby Driver is what happens when pop culture bleeds into every aspect of our lives. We can't tell it apart from reality. Wright isn't saying this is a bad thing, as long as it's in moderation. The plot gradually bleeds into a series of shootouts between people increasingly riled up and desperate to prove what big boys and girls they are. They all want to play pretend, they all throw around their desperate attempts at quotes at one another. Baby and Debora are the only two perfectly content with this, and thus the only two in the film who don't end up being completely pathetic.

I might be reading too much into this, who knows. But there's always layers to a Wright film, that's just how he operates.

I also adore how it was filmed in Atlanta and incorporates many of its locations into the plot. One of my favorite coffee shops in the area is prominently featured. The street I drove on to get to school was the location of a car chase. If any film felt like Atlanta, it's this one.