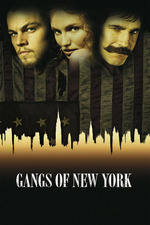 The outstanding performance from Daniel Day-Lewis as William "Bill the Butcher" Cutting together with the fabulous costume and set design and the attention to detail given to the dialects of its characters heightens the overall disappointment that the core narrative of Gangs of New York is just so uninteresting, and contains no meaningful character development. Based on the nineteen twenty-seven non-fiction book by Herbert Asbury, the film includes a variety of subplots which are not examined in any significant way, and there's a severe lack of historical gravitas bestowed to the Civil War Irish Draft Riots.

There's nothing wrong with any of the performances, and overall, it's a strong cast. The much more interesting storyline, however, would have been the rivalry between Cutting and "Priest" Vallon (Liam Neeson) and merely listening to Daniel Day-Lewis discuss Priest and his resurgence after initially being defeated and subsequently carving his own eye out delivers enough evidence that this would have made a more compelling narrative. Martin Scorsese struggles to find an adequate equilibrium to the two generations his characters emerge from, and ultimately he deals with them both insufficiently.