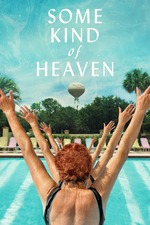 A South Florida retirement community that's undergone an explosion of inhabitants over the last three decades serves as the feature-length directorial debut for established short film documentarian Lance Oppenheimer. He breaks down the palm tree-lined fantasyland gates of the area named The Villages, the world's largest retirement community with 120,000 residents and about 60,000 golf carts, to provide a portrait of four residents who cannot find satisfaction within the community's pre-packaged utopia.

Oppenheimer, himself a native of the Sunshine State, together with his documentary crew, accomplish a great deal of success in evaluating the community that played an important role in Trump's victory in 2016. Older voters, who are mostly conservative, make up around 25 per cent of the swing state's electorate and they turned out in astonishing numbers. There's a concentrated amount of weirdness as he follows his chosen residents' attempting to find a sample of solace and meaning to their lives. He delves into the shadows behind the location's idyllic facade; throwing light on material wealth, which ostensibly implies independence and possibilities, exposing the illusion that the wealthy can live their lives there in elevated happiness.

Oppenheimer's subjects struggle with mental health and socioeconomic issues; the cultural trivialisation of their depression, the wealthy have no right to feel deprived, only exacerbating their feelings of isolation and alienation. Unsurprisingly, the enormous Florida retirement community is not the paradise of happiness that the brochures promote, and far removed from the holy grail of retirement plans. Some Kind of Heaven occasionally plays like a scripted narrative; it's easy to forget that just a few months ago many of the community residents were in the news going about their lives as if COVID-19 barely existed. This is an absurdist, mesmerising and somewhat heartbreaking documentary.