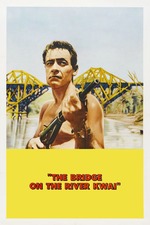 With the historical background of the building of the Burma Railway in 1942–1943, The Bridge on the River Kwai has a traditionally formulated narrative rendered with an exemplary consideration given to its production values. Directed by David Lean and based on the novel Le Pont de la Rivière Kwaï by Pierre Boulle, it is, for the most part, a well-balanced combat tale which gives an account of two interlocking stories.

The first features Alec Guinness as Lieutenant Colonel Nicholson, a brave british army officer who is enormously misguided and steadfastly adheres to the rules, while the other is that of William Holden as Commander Shears who, after a daring escape from the camp, is part of a unit treking through the jungle on a mission to obliterate the bridge. It's completely engaging for the duration of it's runtime and features a memorable use of the Colonel Bogey March, which was composed in 1914 by Lieutenant F. J. Ricketts.