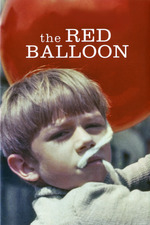 Writer and director Albert Lamorisse managed to create something extraordinary with his Palme door winning short film The Red Balloon. It's a brief tale of an unusual relationship between a young boy named Pascal (played by the director's son, Pascal Lamorisse) and a giant red balloon.

The French filmmaker fills the tight 35-minute runtime with some finely tuned sight gags together with some beautifully visceral tracking shots through the Ménilmontant neighbourhood that lies in the eastern corner of Paris. There's very little dialogue, and the emphasis is placed squarely on the visual storytelling, with some outstanding cinematography from Edmond Sechan. The images of the red balloon counter the very bleak appearance of the Parisian locations. It helps to emphasise how something so modest can generate such enjoyment in a small boy.

While it seems to primarily function as a metaphor for the rise of the French Resistance during the Nazi occupation of France during World War II, its simplicity lends itself to many readings as Pascal's connection with the inanimate object unfolds. The film secretes an undeniable capacity to fascinate thanks in no small part to its production, with each shot building to a crescendo of pulchritude that assists in its visual poetry emerging. The Red Balloon is an enchanting short film.