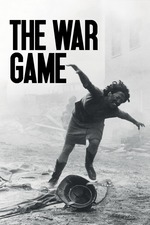 Carved out in the style of a documentary, Peter Watkins portrayal of a hypothetical nuclear war on Britain and its effects is profoundly horrifying.

Financed by the BBC who decided against broadcasting it, even after it started to get prestigious international recognition, for almost twenty years as they didn't want to offend the government as it entirely dismantles their official mid-sixties civil defence guidelines. It's based primarily on situations and circumstances witnessed in Dresden and the bombings on Hiroshima and Nagasaki and of the subsequent social repercussions seen in those areas.

It highlights the incompetency of the British government to inform it's citizens correctly, and deliberately mislead them into thinking that a few wooden boards on their windows and spacious room under the table will help them immeasurably in the event of a nuclear attack. It immediately sets about chronicling the refugee crisis that would arise from the governments plan to evacuate a preselected portion of society from the radiated areas to the outer fridges of the most western side of the island; touching on the racial and social issues of the day, many of which all too sadly continue.

It unavoidably draws comparisons with the current governments shambolic handling of the COVID-19 crisis with mixed messages, delays and U-turns in getting the right information in circulation. It speculatively indicates that the price of sandbags, which the government endorsed for protection, would increase beyond the scope of most peoples pockets of the day as unscrupulous sellers exploit the panic buying situation, which additionally recalls the accelerated price of hand gel on the internet at the start of the coronavirus pandemic.

The unimaginable horrors are presented like news footage, accounting the moments of flash blindness caused by the initial blast, societal descent as radiation sickness together with the shortage of food continue to escalate and looters being shot by the police as the civil unrest increases. It's all interspersed with audio recordings quoting the survivability advice of Herman Kahn, who unsurprisingly became an essential conceptualisation on Stanley Kubrick for the character of Dr Strangelove.