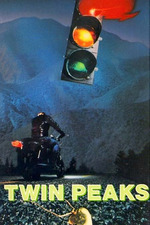 Trying to binge the series before a local theater shows FWWM next thursday before the premiere of season 3.

Some scattered thoughts from this viewing:

Most importantly god bless this guy.

The editing in this is so damn good. The gradual build-up of people's reactions to the news about Laura (especially Sarah Palmer and Donna) is just heartbreaking.

Even before the really shocking/disturbing stuff later on and in FWWM, there are already very eerie imagery/symbols being set-up. The chills I got at the stairway in the Palmer household is probably just owed to Fire Walk With Me but there's a shot of just the ceiling fan spinning that I think is still a bit "off" even without it being attached to the horror later on.

There's some really nice cross-cutting between different events in this episode. On the one hand, so much ground is covered and its very sprawling; so many characters and subplots are introduced (I really like the short introduction to the Bobby/Shelly/Leo situation) but the whole episode is very nicely anchored/focused by Laura's death.

The flickering light in the morgue is fantastic but everyone knows that already.

I love Audrey so much. "Here." At first I was put off by her disruption of the Norwegian meeting, not because she screwed up her father's business plan's (I love her anarchistic hijinks) but because it seemed like she was reacting very nonchalantly and insensitively to Laura's death. That might still be the case but I'm more willing to A) accept that she has her own way of responding to the event and B) she can't pass up that chance to be manipulative and troublesome even if it's in bad taste.

Donna's actually one of my favorite parts in this which is kinda surprising because she's one of the parts I find most frustrating later in the show. I wonder if my impressions of her later on will change or if that'll stay one of the less-enjoyable parts of Season 2.

Mike and Bobby stopping at Donna's house is hilarious. "Don't worry Bobby's doing most of the driving." *Bobby dances on hood of car with a beer*

Mrs. Palmer screaming and the locket being dug up at the end of the episode is so haunting. It's been long enough that I've actually forgotten who is grabbing the locket and I'm SO EXCITED to keep going.

I only have a couple reservations about this wonderful start to the series:

1. Bobby's reaction to Laura's death has always felt off to me. Not the angry defensiveness--I get that--but the lack of much initial sadness/shock. I know Cooper says Bobby didn't really love her or something but I don't think Bobby should be that unfeeling. But maybe further context/development will resolve this issue for me.

2. Sometimes the juggling of tones is a bit awkward. One moment I'm tearing up at something and then we have one of the really campy humor segments. I love both independently but sometimes it feels wrong when going from one to the other. It's still handled remarkably well overall but sometimes the exchange from moment to moment is awkward.

Season 3 hype train off the rails