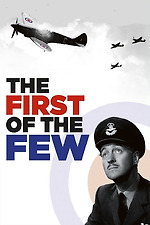 Quite solid biopic of the designer of the Spitfire fighter, the most effective tool of the few who did so much for so many in the summer of 1940. It is a little slow getting started but soon finds its footing and holds one's interest for nearly two hours. Produced and directed by Leslie Howard a year before he was murdered by the German Air Force when his civilian airliner was shot down, it marks his last appearance on film and is a fitting valedictory to the country he served in two world wars. He is superb in the lead, as good as he ever was perhaps. David Niven, reassigned from more conventional military duties, is as relaxed and charming as ever as Howard’s friend and test pilot who tells the story, in flashback, to the young members of his RAF squadron.

The film is effective not only as drama and propaganda, it boasts some very lovely set design and matte paintings as well as fine model work to evoke large-scale events replicated on a wartime sound stage. It also has the most affectively edited mix of staged and actual combat footage I have seen in any war film, and I’ve seen a lot. I continue to be astonished at the quality and civility of the films that came out of England during the war. They are nothing to be ashamed of unlike most of what Hollywood produced which are juvenile and hysterical by comparison. The only exception that readily comes to mind is Zoltán Korda’s “Sahara” which shares many of the same positive attributes.