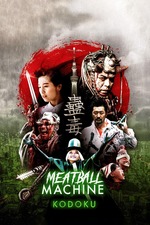 This was the film Mandy _should_ have been. Absolutely insane, and for the most part, really quite fun. There's an affable cheapness about the whole proceedings that I just love. Crazy rubber monster suits, oddball parodies (there's a decent Drunken Master II homage in here), and ever inventive ways of 'sploding people.

If you've seen other Yoshihiro Nishimura films, you probably know what to expect, but know this is actually quite a bit lighter than his usual fare. It's also pretty refreshing to see Yoji Tanaka in a starring role. But the show belongs to Yuri Kijima, and her topless rodeo on a human-mecha-horse-motorcycle. It hast to be seen to be believed. It out-meatballs its predecessor at nearly every opportunity.

That said, i had to deduct a star for a rather nasty stinger at the end of the film. WARNING TO POTENTIAL VIEWERS: Turn the film off once the alien juice commercial starts to display. You'll save yourself from viewing some real-life slaughterhouse footage. Ugh. I had to turn away for that.