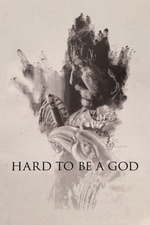 As it turns out, not all B&W, Russian-language medieval epics are cut from the same cloth. Despite a surface resemblance that has fueled a basic reference point for some, Hard To Be a God is really best described as Anti Rublyev: man's faith in cruel circumstances / figures of mysterious origin (which - it can be pointed out - bear an unexamined logical explanation) yields not a wellspring of divine artistic inspiration, but rather an outhouse planet in which the most basic and vital functions of human existence (eating, breathing, physical contact with others....um, relieving oneself) become exercises in sheer repulsiveness.

Having seen Roar one night prior (an entirely different opposite of Hard To Be a God), I still feel confident saying that this is the most inimitable cinematic oddity I've seen in months, if not years. There are certainly predecessors here (Aguirre and On the Silver Globe come to mind first), but I can't think of another film that has so successfully managed to create a non-contemporary setting without leaving any imaginable traces of its own technique.

It's beyond me to go any further with this until it marinates longer. But I'm so gratified that I held out for the big screen (and that Cinefamily obliged in programming it).