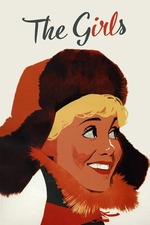 In English, this movie is called The Gals (or The Girls) and in Russian the title is Девчата, which is pronounced “dev-chata.” I’ll refer to it in this post as Devchata because Word seems to freak out when I switch between Cyrillic and Latin characters.

Any-who – Devchata is a romantic comedy from 1961. One plot summary from IMDB reads, “Boy GETS girl. BOY loses girl. GIRL gets boy!” I don’t know why they capitalized it like that but it gives you a general idea behind the movie.

Tosya (Rumyantseva) comes to a Siberian lumber work camp to work as a chef. She falls in love with the top-performing lumberjack Ilya (Rybnikov) only to find out that he bet that he could romance her. Will they work out?! Will her heart ever heal?!

I think I may have mentioned this before but I’ll say it again here just in case. There was a Russian movie, I forgot the name, but it was filmed two different endings: one for mass audiences abroad and one for Russian audiences. In the mass audience ending, the main character heals from her illness and lives happily ever after while, in the Russian cut, the main character dies. The happy ending was too unrealistic for Russian audiences. This is to say that given the Russian cinema’s history, Devchata kept me guessing literally until the end of the movie.

I’d recommend Devchata if you want something different and something kinda fun. It’s free on YouTube and it has English subtitles. I found the cultural differences immediately noticeable and fascinating. At the beginning of the movie, Tosya arrives at her new home: a cabin in which she will live with three other women. She looks around and makes herself at home; she gets some food and tea from the pantry near one of the beds and starts a fire. Her roommates come home to her just beginning her feast. As an American watching this I thought, “Oh man, she is going to be in such trouble! Who goes through peoples’ stuff?” The mean roommate, Anfisa (Druzhinina), barks at her for doing just that. Tosya protests by emptying her paltry bag of it’s few objects and says, “Fine, here are my things!” The other roommates apologize for Anfisa and ask Tosya about herself. They just either ignore Tosya offense (not likely) or assume that their things are communal (more likely).

As soon as I saw their reaction I mentally shook myself. “This is absolutely not an American movie.” Despite all the non-American movies I’ve seen, I still find myself, from time to time, going into a movie with an American perspective.

Once I had the correct attitude, it was a lot more enjoyable. I wasn’t trying to manipulate the ideology of a rom-com to fit my political background. Even more, I was able to appreciate the cultural difference.

I expect movies from the 50’s and 60’s to have pretty rigid gender roles: women are in the kitchen if, they are mentioned at all, while the men are working. In Devchata, Tosya is indeed in the kitchen but her prowess and importance is emphasized. I’m not just saying the film gives a half-hearted suggestion that the women provide a support role, it declares that without her hearty meals, the lumberjacks could not function. Sure, that seems like it could be problematic, but I’m more comfortable with this film’s presentation than other movies. At one point, the boss from the city comes to inspect the camp and tours Tosya’s hut in which she cooks. “Do you cook in shack?” Tosya confirms that and asserts that she should have a better kitchen. The boss agrees and the next time we see her cooking, she is in a new kitchen. None of the other characters get similar treatment, I might add, though I’m not sure if any other characters are presented with the option to change their situation somehow for the better (if that’s what they want). Yes by the end of the movie everyone, men and women, are working together building houses.

Speaking of building houses, you know the ultimate solution to problems in Hollywood musicals from the 30’s to the 60’s? “Put on a show,” or a musical performance.

I must warn you, if you are interested in seeing Devchata, that Tosya is painfully enthusiastic and it makes me feel bad for being frustrated with someone being so bubbly. She’s like a Russian answer to Debbie Reynolds. She doesn’t detract from the movie, but it does make me glad that I don’t have to live with roommates.